Not Just for the Garden: A History of Art Made from Soil 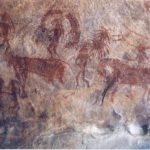 It’s no secret that at The London Topsoil Company, we think that soil is amazing. However, it’s not just the gardening community that thinks so! Soil gives life - it’s the very essence of the food that we eat, and it is the understanding and utilisation of soil that has allowed us to grow into the thriving society that we are. We’ve been using soil as art since art was first created, so we’ve decided to take a look at just where the history of art made from soil started, and how modern artists are now using soil in their current work in the present day.

The first ever example of art made from soil - using soil as a pigment to be precise - was in cave paintings that arguably formed the basis of creative thought in society. Back when we were communicating in grunts and our primary objective was simply to survive, some strange, creative soul picked up some dirt and smeared it on a cave wall. Cave paintings were a turning point in our history; it is the first act we did that was in no way beneficial to our survival. Cave paintings were done to tell a story, to delight, to entertain - and that was their sole purpose. It was the pivotal moment when something ‘creative’ occurred in our history, and was the germination for art as we know it.

Simonova is a Ukrainian artist known for her sand art. She works in a variety of mediums, and often does live performances of her stunning process. By using the malleable material of sand and soil, she is able to tell a story even more in-depth than art usually affords, thereby taking the audience on a mouldable journey. The way in which she rapidly takes us from image to image, emotional state to emotional state, through her art made from soil, could be a telling portrayal of the cyclical way that soil harmonises the earth's journey through the seasons, and our journey with it.

Soil is an essential part of our lives, and at The London Topsoil Company, we celebrate anyone who decides to make art made from soil, as a way to showcase its importance to humanity as a whole. Why not try some of your own soil art today? We’d love to see it, so make sure to share it with us on our Facebook or Twitter.